For over forty years many of the Vacuum Pump Stations throughout Asia, Europe, the USA and Australia/NZ have used Mild Steel Collection Tanks as a receiver of the sewage in the Pump Station building. With over 1,000 systems now in place we have noticed an increase in the number of rust problems and even tank failures occurring. 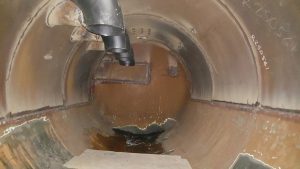 Wear on inside of Collection Tank

According to many standards the life of a collection tank should be 50 years. There is a requirement for 2 coat epoxy paint and proper testing to ensure a correct coating and protection. In recent years there has been a move to only allowing stainless steel 316 tanks or fiberglass tanks. These come at a higher cost and Clients need to make sure that the source and quality of the 316 stainless tanks is known to them.

So why has there been an increase in failures? Many of the tanks that we saw installed in the eighties and nineties have survived without any wear at all and will continue to last their expected 50 years without a blemish. John Radinoff, CEO of Flovac Vacuum Sewerage Systems, the largest supplier of vacuum sewerage systems suggests that it is a change in the typical market that uses vacuum sewerage systems. “In the early years nearly all projects with vacuum sewers were septic tank replacement schemes, in the last decade we have seen a big increase in developers installing vacuum sewers due to the low cost of installation and the speed of installation. In developer projects we see a continual amount of rocks and construction debris entering the system. As the vacuum valves are also larger than than earlier valves, there is less risk of blockage at the pit and more likelihood that any rocks would end up at the pump station in the collection tank. Staged developments also operate at a higher air/liquid ratio until fully developed and so the velocities can be higher than in a traditional system. And it is not just new developer projects. Older established towns are being upgraded, higher densities, larger houses and growth in the suburbs.” How should you prevent a failure?  Most suppliers recommend as part of their maintenance procedures a regular check up of the internals of the tank. Usually an inspection at the end of year 1 and then every two years after that. In a recent poll in the USA 50% of vacuum system operators performed annual tank inspections. Unfortunately 90% of those inspections were related to emptying the tank of any solid objects (not much is ever found). Very few operators ever inspected the thickness of the tank, whether the paint was in good condition, if there were any chips in the paint, if there was any rust around the weld points in particular the nozzles or dished ends. This should be the prime reason for the inspection.

If there is any construction going on in the project then an annual inspection should be done. Special shoes must be worn so as not to scratch the surface.

This is not an easy fix. We have seen many pump stations where there is no chance of being able to get a tank out of a station. Many of the Flovac systems are designed to facilitate that but in many cases it might mean the demolition of the whole building.

One recent project had 2,500 houses connected, so replacing a collection tank while the sewer was live was a major production. With some smaller systems building a whole new station is easier.

We strongly recommend that you urgently put in place a date for an inspection. Contact Flovac for a procedures guide as to what to check for, make sure it is in the diary for every year or every two years.

If it is caught early enough, the tank can be repainted during an off peak period with no disruption to the community.

All sewerage infrastructure needs some form of maintenance, hopefully minor but sometimes it is major. Even though we have highlighted something that could be expensive and a major problem, it is something that can be maintained and corrected and should be covered during commissioning.

One thing we are trying to avoid is a total collapse of the system with no warning and fortunately we have never heard of a system failing due to a tank collapse. They have been patched up and kept going, but it is better to be forewarned. This was a buried tank that was failing and needed to be cut into pieces to get it out of the pit in the station.