Flovac has just completed its first train extraction system in Canada at the Willowbrook Maintenance facilities for the Go Transit group in Toronto. 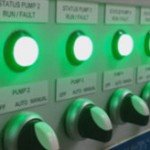 As trains come into the yard maintenance crews can hook up a vacuum hose via a fitting to the trains sewage holding tanks. The tank is evacuated via a push button control on the Flovac Valve. Sewage goes via a vacuum main back to a series of vacuum pumps and then discharged to the gravity network.

The whole system has monitoring so that operators can see exactly what is happening within the facility to control the amount of flow that is occurring at any one time.

The management team and operators at Willowbrook were particularly impressed with the speed of the evacuation of the trains as the process took a matter of seconds rather than the extensive delays that they have previously had. This meant that money was saved in labour costs but more importantly in the amount of time that it took to get the trains back into service. Flovac has now installed extraction systems for a number of  clients in particular for the Deutsche Bahn’s ICE network, including systems in Frankfurt, Cologne and Dusseldorf.

The system can handle either single or multiple suction points even up to 60 extraction points.